Cereisen is the german name for the pyrophoric Cerium-Iron alloy

Auermetall® flints for over 110 years 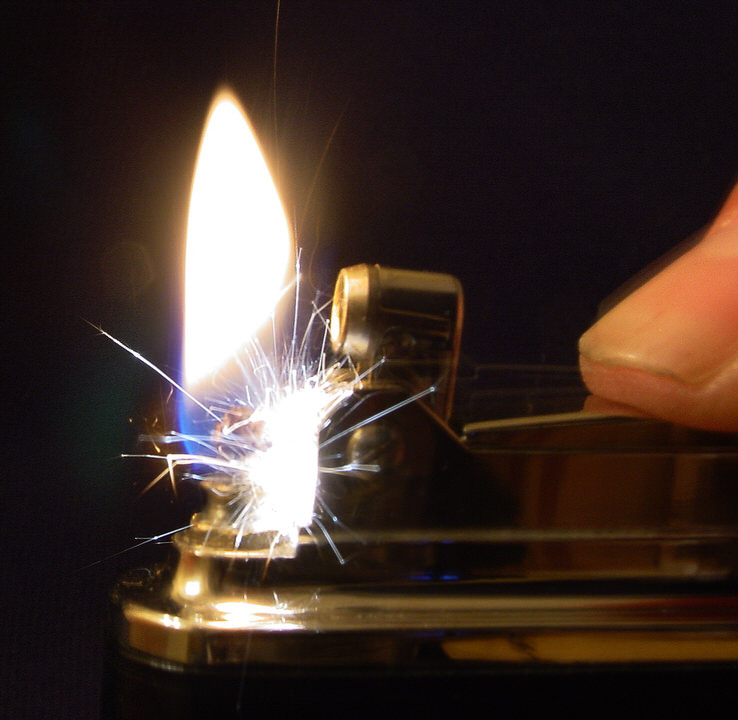 Baron Dr. Carl Auer von Welsbach filed a patent (DE 154807) in 1903 entitled "Pyrophore Metall-Legierung" (Pyrophoric metal alloy). This patent was the reason not only for the flints and lighter industry, but also of rare earth metallurgy as a whole.
This invention was an important starting point for the urban development of Treibach and the city of Althofen and through this development of the Auermetall® hundreds of people have also been able to find a safe workplace at this site over the years.

In former times up to 400 employees were employed in at that time called company "Treibacher Chemische Werke" in the mixed metal (rare earth metal alloy) and the flint production.
Today, 20 employees produce comparable quantities. An annual production of about 200 tons corresponds to about 1.25 billion high quality Treibacher Auermetall® flints. Treibacher Industrie AG is currently taking the leading market position with high-quality flints.
The Cereisen flint, or better known as "Auermetall® flint", often incorrectly called flint (flint or silex is a pebble-like rock), was invented by Dr. Carl von Welsbach. This resulted in the first industrial production in the "Treibacher Chemische Werke" in Treibach and spontaneously the new industry of lighter manufacturers was born. To this day, lighters are produced in every imaginable decorative design.
Auermetall® flints initially produced in the ingot casting or tube casting process, are today produced both by chill casting and in the extrusion process. Depending on the purpose, they are manufactured according to standardized measures for lighters and gas lighters. Its composition consists of an alloy of approximately 75-80% cerium mixed metal, 15-20% iron and other alloying partners such as copper, zinc, magnesium and aluminium.
Initially, the Auermetall® flint was hit in the lighter against a steel edge that was near the petrol-soaked wick. This ignition technique was somewhat unreliable and therefore the shape of the flint was changed to a more elongated and flatter shape, which was attached to the outside of the lighter. This allowed one to rub over the flint with light pressure, igniting the petrol soaked wick in the steel tube. Because of the flat shape of these known as "Treibacher lighters" fire dispensers were preferably worn in the vest pocket of the dress suit, and they called her briefly "tailcoat igniter", in German "Frackzünder".
Without a doubt, the Auermetall® lighter has prevailed quickly and globally to this day. Since about 1909, the more comfortable sparking wheels have been used to get sparks.
However, the good old match for whose protection, among other things, a lighter tax was established in France, could not completely displace it. But also new ignition methods, such as the piezo ignition and the battery high-voltage ignition, could not replace the Auermetall® ignition on lighters.
On the contrary, for several years now, the Auermetall® lighter has received a new upswing as a low-cost and utility lighter in the form of the "disposable flint lighter" and is very popular worldwide.